Welcome to our July House Blog! This month we explore the history of the Brudenell Portrait Collection.

When Charlotte Brudenell took over the running of the house in 2013, she realised quickly that the 500th anniversary of Brudenell’s living at Deene was about to happen. Deene Park has been passed through fourteen generations of Brudenell’s for over 500 years – a feat few places can emulate without name changes. She wrote and had made, pop up charts of the sixteen Brudenell owners of Deene Park since 1514 which are still displayed in front of the relevant portraits of the Brudenell owners during the architectural and historical visitor tour route.

Deene Park is fortunate to have portraits of each of these owners, and we can also add many portraits of Adeline, Countess of Cardigan who enjoyed over forty years of merry widowhood as life tenant at the end of the 19th Century.

Perhaps ironically, there is a tradition that the heir is not allowed to have his portrait painted until he inherits Deene. This stems from the childhood paintings of the young Lord Francis Brudenell who died before his father Robert Brudenell, 2nd Earl of Cardigan. Thereafter it was considered unlucky. As his father died at the ripe old age of 97, this was not surprising but it means that the portraits thereafter tend to be of older men in their prime, some weighed down by the airs of responsibility and others by chains of office. They are an eclectic mix and include works by artists such as Gaspars, Robert Peake, Wright, Jervas, Hudson, Beechey, Richard Buckner, Francis Grant, James Sant, and Alfred de Prades to lately Derek Hill and Richard Foster.

In its way these portraits have evolved through time and were never intended to be a deliberate collection. That Deene Park still stands after so many years is testament to their good stewardship. 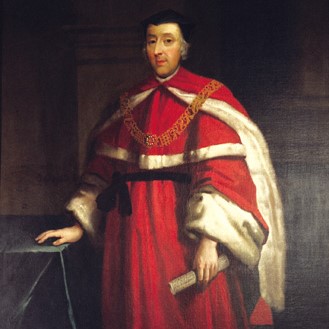 After marrying Margaret Entwistle in 1485, who owned land in Leicestershire which is still owned by the Brudenell family today, he took over the lease of Deene in 1514. Deene had belonged to the Abbey of Westminster since before the Conquest. A rent of £18.00 per year was payable, which had been in force since the reign of King John, and which continued to be paid until 1970! 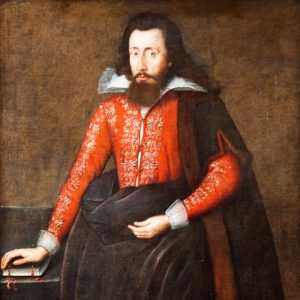 Sir Edmund Brudenell came to live at Deene when his grandfather, Sir Robert, died in 1531. He too had enlarged his estates by marrying an heiress, Agnes Bussy, from Lincolnshire. He was twice High Sheriff of Northamptonshire and once of Rutland. Sir Edmund was responsible for enlarging the Great Hall and providing the enormous fireplace decorated with his own and his wife’s coats of arms. He also supplied the Italianate porch and re-modelled part of the East side.

His diary remains in the library, in which he records the visit of Queen Elizabeth I on 12th August 1566.  In 1569 he was given the crest of a seahorse, many of which can be seen throughout the House. 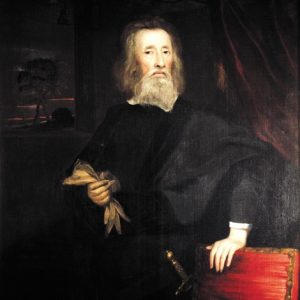 Thomas succeeded his three uncles and married Mary Tresham, the daughter of Sir Thomas Tresham. Although Thomas was a rich man with an income from his estates of £5,500 in 1635, he was extravagant and lived well beyond his means, spending enormous sums on building as well as buying a baronetcy for £1,000 in 1611 and a barony for £6,000 in 1628.  He paid endless fines for being a Roman Catholic and had to liberate his kidnapped son for £3,000 whilst on his Grand Tour.

Thomas fled from Deene when it was sacked by the Parliamentarians and he spent two years in Wales until he was handed over to Roundheads at Gloucester.  He spent four years in the Tower of London, two of which were in solitary confinement.  His son offered King Charles I £1,000 in return for an Earldom, a promise which was honoured by Charles II at the Restoration when Thomas was made Earl of Cardigan. 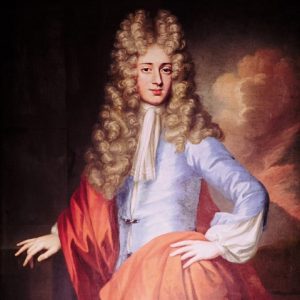 When George succeeded his grandfather, the Second Earl in 1703 he was living in Rome but came home in 1706 – his Jacobite father, Francis Lord Brudenell, had been imprisoned for four years for high treason and died in 1698. He converted to the Church of England, took his seat in the House of Lords and married Lady Elizabeth Bruce, daughter of the Earl of Ailesbury. They left the house much as it was but modernised and redecorated the interior. He built the lantern over the Oak Staircase, repaired the Great Hall and converted the summer house into a billiard room (now the Chapel). He died, aged 46, of a nosebleed. 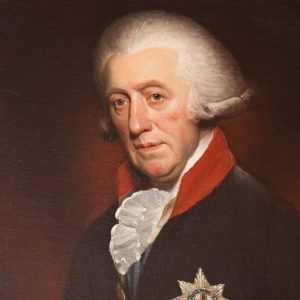 The eldest of the four sons of the 3rd Earl, he was only nineteen when he inherited in 1732, although he was already married to Lady Mary Montagu, daughter of the Duke of Montagu, his neighbour at Boughton. She inherited her father’s estates and they lived in both houses as well as in London. After some years he achieved his ambition and was created Duke of Montagu in 1766. Their only son, the Marquess of Monthermer, died unmarried in 1770 and their daughter Elizabeth married the Duke of Buccleuch & Queensberry in 1767.

He became Constable and Governor of Windsor Castle, a post which he retained all his life, and was made a Knight of the Garter in 1752. 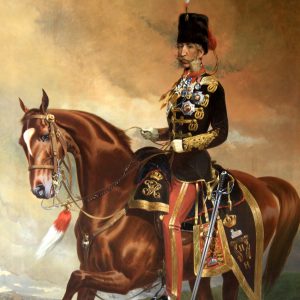 James had seven beautiful sisters and as the only son was inevitably over-indulged.  His rapid advancement in the army, partly due to wealth and influence, made him many enemies and he was the controversial but certainly brave and handsome hero of Balaklava. The 7th Earl’s first marriage, to a woman divorced on his account, was unhappy, but when he was 60 he fell in love with the ravishing Adeline Horsey de Horsey who was 27 years younger. When his wife died in 1858 they sailed to Gibraltar and were married there, well away from London society who were scandalised by their behaviour. When he died in 1868 Lord Cardigan lay in state for two days at Deene and nearly 2,000 people filed past the red velvet-covered coffin. 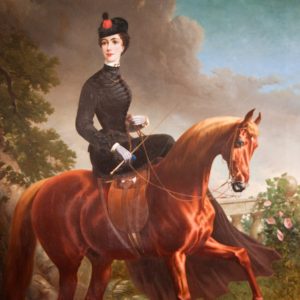 Following the 7th Earls death Adeline lived for another forty-seven years, enjoying a merry widowhood at Deene in hugely extravagant luxury and ended her days with frequent visits from the Bailiffs. 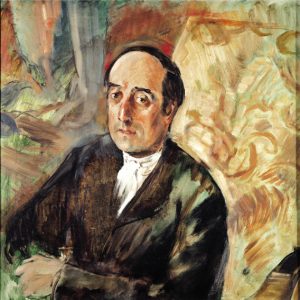 After his father died in 1962 Edmund Brudenell and his wife Marian, with her exquisite taste, restored, redecorated, and largely refurnished Deene to return the house back to its great beauty and splendour. Their son Robert inherited Deene in 2014 and with his wife and son and with the help of visitors it is hoped that the house can be preserved and continue as a home lived in by the family who have cherished it since 1514.

Thank you for taking the time to read our latest House Blog. To read more of our blogs please click here.