When Charlotte Brudenell arrived at Deene she discovered that the topiary intended yew trees planted on the east side of the house were not happy.  She thought that planting a rose garden would fulfil several criteria that she wanted.  First was access to the Chapel along a dry path.  The long walk around in wet winter was proving unkind to Rector and congregation alike!  So an arch was cut out of the yew hedge to facilitate a quicker access and a bonded gravel path was suggested. 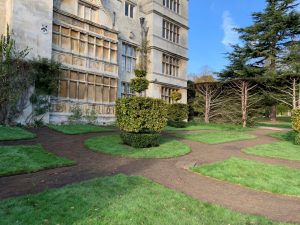 With a desire to make 21st century interpretation of an older garden, she then researched the layout of the 17th century chapel and adjoining small parterre alongside.  The stones and balustrade had been removed when the bridge across the newly formed lake in the late 18th century was designed.  Nothing at Deene is ever put to waste, as much as possible is up-cycled, and the ground on the East Side had been left with its gentle slope of grass.

The first designs for a Rose Garden, with the help of Alice Atkinson, was to concentrate on taking the patterns from the 1597 ceiling of the Tapestry Room.  The cross shape of the earlier garden was kept, but instead of herbs a profusion of roses were chosen.  The recently planted five copper beeches were left and the design incorporated them in situ. 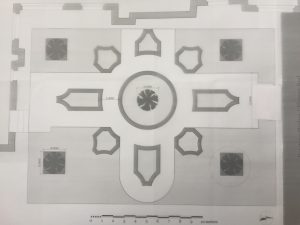 The roses were all chosen from David Austen because of their strong scent and because of their names equated with various family and close friends such as Maid Marion for the late Marian Brudenell and Rosa Mundi, for Godmother Rosamund.  The English roses in the centre are Sir John Betjeman, Sophie’s Perpetual and all the roses then radiate out from the centre from deep crimson to softer, paler ballerina pink.  To the East and West are Olivia Rose Austin and the Alnwick Rose and to the North and South, Lady of Megginch, Gertrude Jekyll, Maid Marion and Queen Anne.  In the four corners are Rose Mundi, a suitably Medieval cultivar with its striped petals. 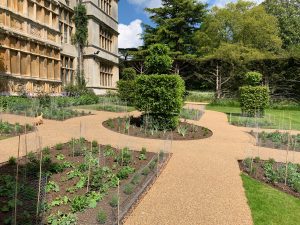 The beds could not be edged in yew (too thick), box (too dangerous), Ilex (too woody) and so Loddon Pink Lavender was chosen to enhance the Pink Rose Garden and not detract from the beautiful David Hicks designed purple parterre on the South front. 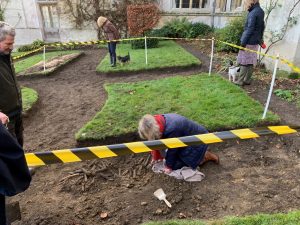 The centre of the flower beds has been filled in with Alchemilla Mollis, white Nepeta, Salvia and Pink Irises.  This will extend the flowering season and provide ground cover.  The effect against the Tudor window has enhanced the architectural details of the beautiful stonework, and the lower height has meant that looking upwards, the garden will act as a cloud base of pink and green profusion. 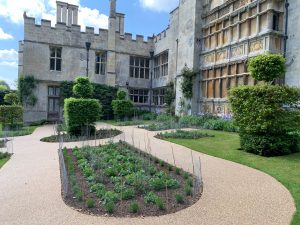 We were delayed by planning permission, which we did not require in the end, but luckily the hot summer of 2018 might have fried young plants anyway.  We started work on the path, and to our dismay, discovered a pile of human bones.  We followed the correct due process and had to contact the Coroner and the Police, the latter arriving to check that it was not a crime scene and the Coroner, who realised that the bones were medieval.  Our historical records, with particular focus on the 1746 Thomas Brazier map of Deene Park proved what had been there before and showed that in the dismantling the late Georgians had whooshed a pile of bones to level the ground, which probably came from the crypt beneath the Catholic Chapel. 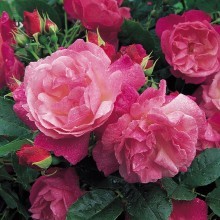 Leicester Archaeological Services arrived with saddened glee when told that we really did not want to disturb any more bones, but would be happy for the pile to be analysed and then returned so that they could be re-interred with dignity in a custom made oak box.  The decision was made to bury the box as close to the altar in the Chapel – to be as close to God as possible.  Thereby we could restore their dignity and make up for the 250 year’s worth of unintentional disrepect. 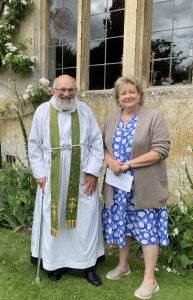 The Archaeological Society were unable to date them specifically, but without medieval archives we only know them as the Unknown Medievals.  They belong to four adult and two sub-adults.  We are now happy in the knowledge that there must have been a small monastic cell when Deene Park belonged to the See of Westminster, who used it briefly each year whilst inspecting their Church lands close by. 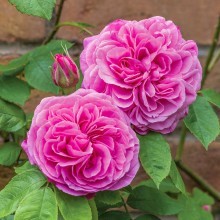 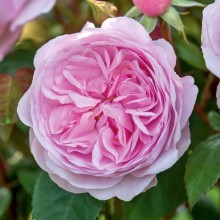 When the Rose Garden has grown to full maturity, we hope it will be a scented and pretty spot of the garden that will enhance the East Front and we are hoping that it will act as a backdrop for civil service weddings who might choose to hold their marriage service in front.  Meanwhile, until then, we are fighting the battle against those hungry rabbits who must think that heaven has finally reached Deene Park! 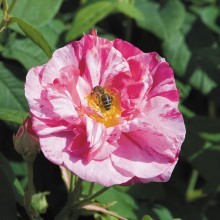