The arrival of September brings with it the beginning of meteorological autumn, and a distinct step change in the gardening year.  Responding to the shortening days that get steadily cooler, we turn on the central heating and head down to the shops for the warm winter coat … our gardens instinctively react to the changing of the season too.

The most notable reaction to the change of season are vibrant autumnal leaf colours that cheer even the most drab days.  These result from the slowdown in production of green chlorophyll that eventually stops altogether as conditions get yet cooler.  Existing chlorophyll in the leaves breaks down, and as the green colour fades, yellow and orange carotene pigments that are normally masked by the chlorophyll are revealed.  Simultaneously, a layer of corky cells form across the base of the leaf stalk, in preparation for shedding.  This restricts the movement of sugars back into the plant.  Sugars become trapped, concentrated in the leaf, and are eventually converted to anthocyanin pigments giving the leaf a red, purple, or pink colour. 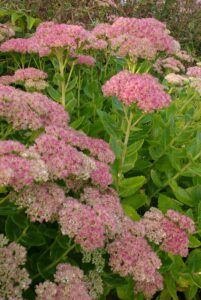 Although the cooler conditions  and shortening days encourage the majority of plants to close down in preparation for winter, others decide it’s time to put on a show and see the autumn out with a final floral fanfare.  Cyclamen coum, sedums, asters, rudbeckias, and heleniums, to mention just a few, keep the gardening year going until the inevitable rigours of the oncoming winters finally cut them down.

Autumn is definitely a time for gardeners to reflect on the growing season just passed, and prepare for the season to come, mulling over the successes and those things that might need improvement.  Spring flowering bulbs need to be ordered and planted, cuttings should be taken of the tender perennials used with such great effect in pots and urns throughout the summer, and as herbaceous plants die back they can be divided and replanted.

Other changes, however, are forced on the gardener.  One such event, here at Deene Park, was the sudden and unexplained death of one of the eight clipped hawthorn lollipops on our Parterre, early in the summer.  Even though it came into leaf quite normally in spring, it failed to produce meaningful growth, and died suddenly in dry weather. Given that there were no signs of disease as the cause of the death, it most likely resulted from the stress of tight clipping and a sunny and dry location.  To maintain the symmetry of our Parterre we replaced the dead hawthorn with a new one.  Our first task was to carefully remove the Tradescantia andersoniana and Iris latifolia growing beneath the tree to replant later.  Once the dead tree was removed, we excavated a suitably wide and appropriately deep hole to accommodate the root ball of the replacement, and in it went.  Having back-filled and firmed the root ball into its planting hold, our new tree was securely staked, and the Tradescantia and Iris replanted. 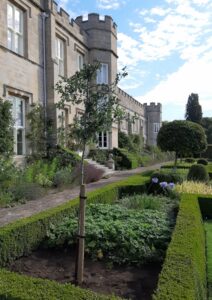 Whatever the season, there’s always something going on in the garden to keep the gardener busy, be it expected or otherwise.