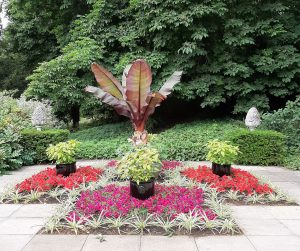 The tasks involved in keeping our gardens in tip top condition require undertaking whether there are visitors to see them or not. Lawns need mowing and edging; hedges and topiary need clipping; borders need dead heading and weeding; the mass of young plants featured in the May blog are now in the pots, urns, and tubs, and in need of watering and feeding. Whatever else is going on around us, the garden keeps to its time honoured rhythms.

Every now and again, however, the garden throws up a surprise. In early spring, unusual looking plants were seen growing in the lawn just below the Parterre, with leaves similar to but not quite the same as ribbed plantain, this plant just seemed somehow different and worthy of investigation. The internet can, at times, be a great thing, and after a little online detective work, the conclusion was reached that we may have bee orchids, Ophrys apifera, growing in our lawn.

The lawn was searched thoroughly, and half a dozen potential bee orchids were spotted and marked with canes. When the lawn was mowed, these marked plants were avoided and saved from the chop. All we had to do was wait for them to flower to be sure of what we had. As May rolled on, flower spikes began to rise from our plants, reaching upwards some eight inches or so, and producing the most marvellous flowers…bee orchid flowers!

The bee orchid gets its name from its main pollinator, a species of bee. To attract bees to pollinate the orchid, it has flowers that mimic the female bee. Drawn in with the promise of love, the male bee attempts to mate. As he lands on the velvet textured lip of the flower, pollen is transferred, but the poor bee is left lovelorn. Hope springs eternal, the male takes flight, and, spotting what he believes to be another female, repeats his amorous advances, pollinating the second bee orchid in the process. The evolution of the bee orchid is believed to have been driven by this rather one sided relationship. In Britain, however, the right species of bee is not present, and the bee orchid is self pollinating as a result.

How bee orchids came to be in our lawn is a mystery, though the seed was most likely carried here on the feathers or fur of the local wildlife. Our hope is that these orchids will multiply, so to aid this, the orchid flower heads will be left to flower and hopefully set seed. With a little luck, this lawn will become an orchid meadow in time. 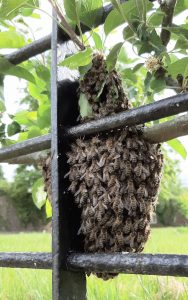 On the subject of bees, there are a number of wild bee colonies here, and one of them recently swarmed and set about establishing a new colony. Swarming is when the queen bee leaves her colony, with a successor in her place, to establish a new colony elsewhere. As the swarm settles down, a resting colony is set up with the queen at its heart until scout bees find the ideal location for the new colony, at which point they all set off for their new home. We were lucky to witness a resting colony as it settled on the espalier apples in our old Walled Kitchen Garden, and get close enough to take pictures. At this stage the colony is quite placid, so there was no risk in getting close up. Within a few hours the scouts had done their job, and the resting colony departed for their new permanent home. 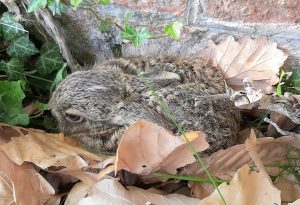 Among the other wonderful encounters with wildlife here was the young hares, known as leverets, also spotted in the old Walled Kitchen Garden orchard. Nearby, close to the gardens compost heap, a whopper of a grass snake, some four foot long, was seen in the process of shedding its skin. As you can see from the picture, it had the most remarkable milky blue coloured eyes, the result of an oily secretion between the old and new skins. When the snake has shed its old skin, its eyes will be returned to their normal colour. 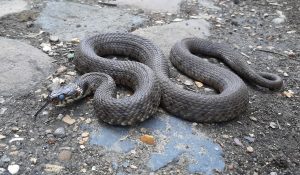 The abundance of nature in our gardens is a delightful reminder of the world beyond our neatly manicured world. Happy gardening.