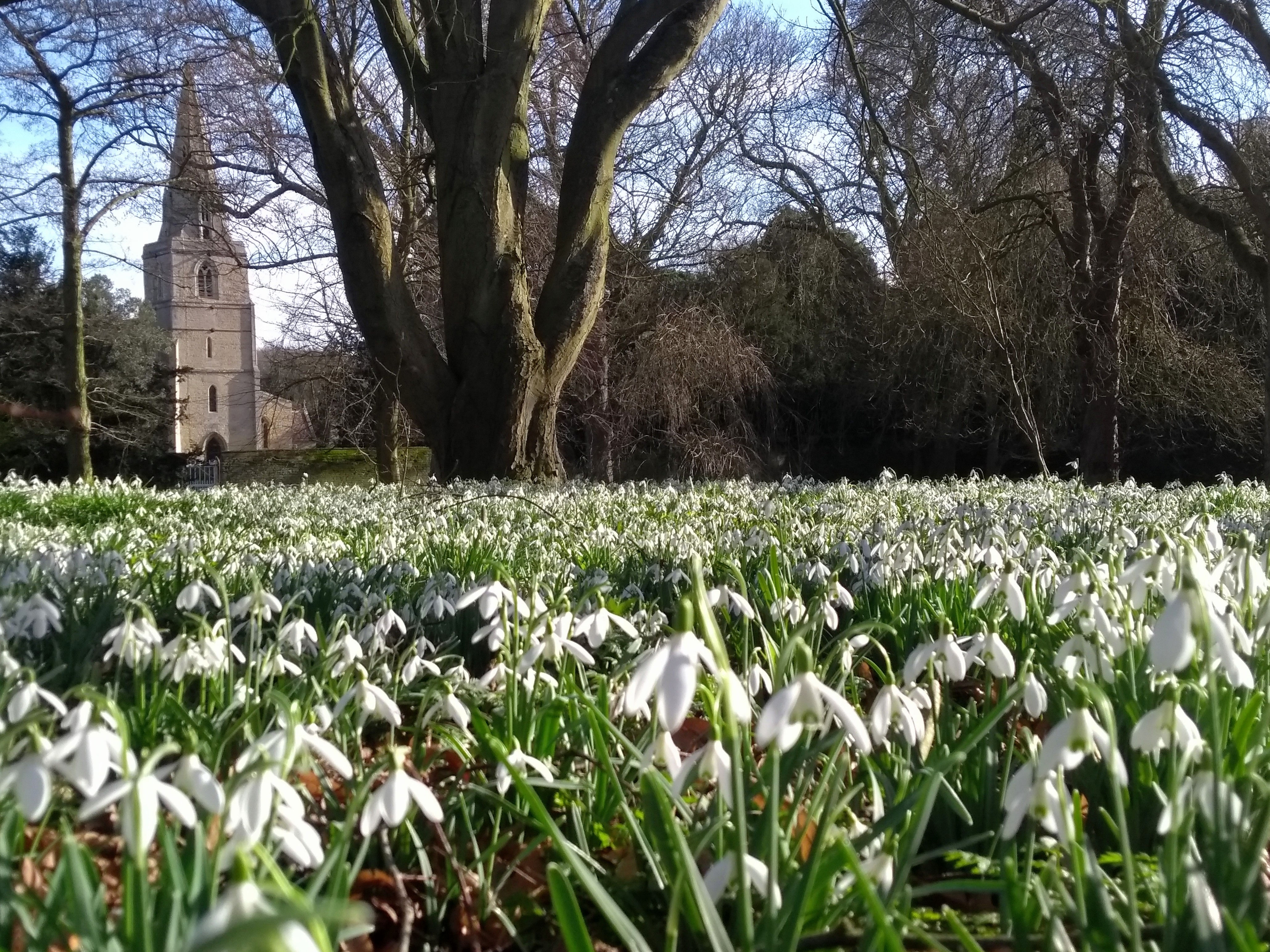 It seems to me that February is the month when our gardens really start to stretch and yawn back to life after their winter slumber. As the days lengthen, there’s a real sense of optimism that spring can’t now be far away. What could be more redolent of nature’s reawakening than the humble snowdrop? William Wordsworth summed things up beautifully with ‘’Chaste snowdrop, venturous harbinger of spring.’’ 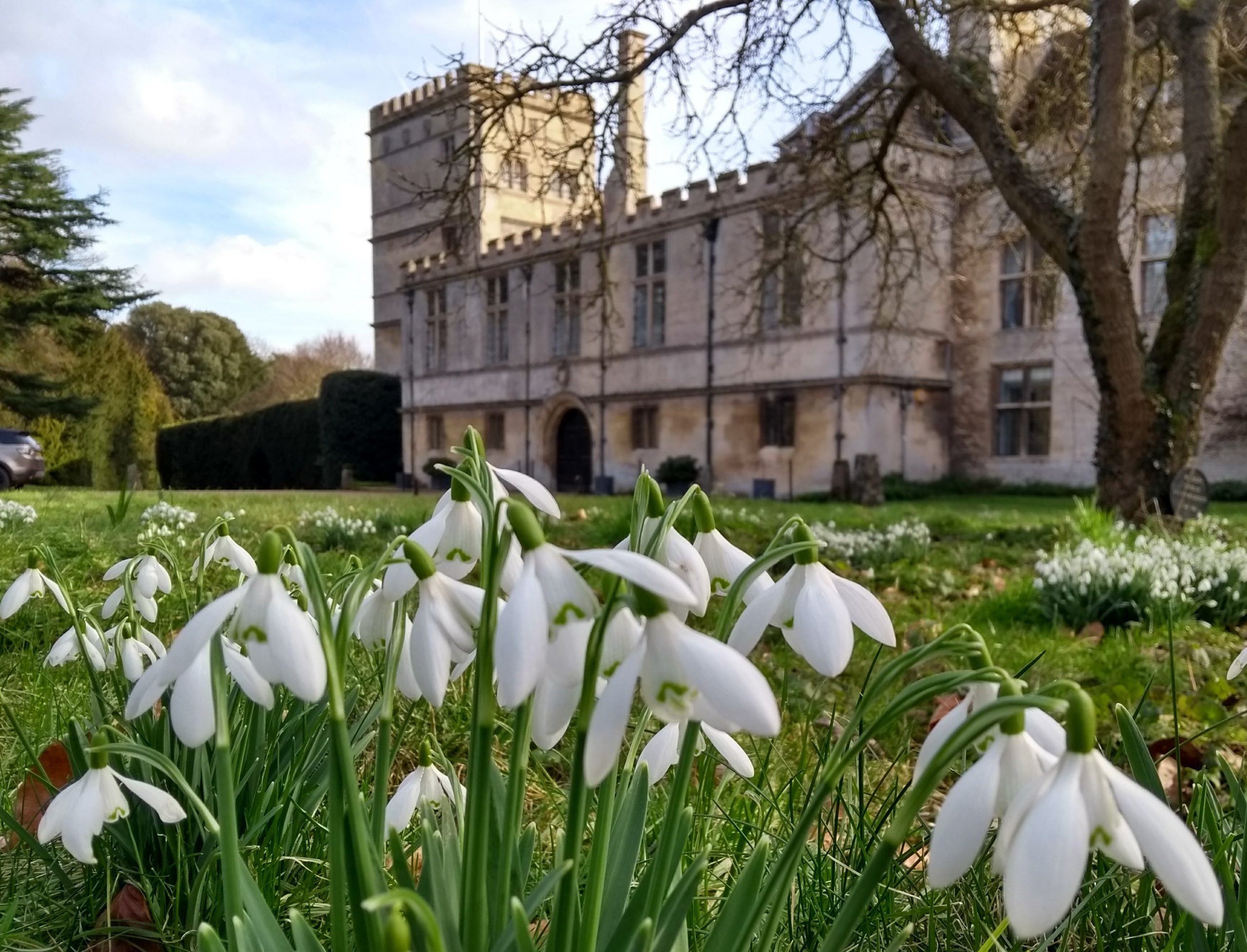 Here at Deene Park we have acres of naturalised snowdrops carpeting the managed wooded areas that surround our formal gardens. I say naturalised because although snowdrops are a familiar sight in our countryside, they are not actually native to Britain. Snowdrops are believed to have been brought to Britain during the expansion of the Roman Empire. In Britain, where snowdrops were introduced into cultivation, their earliest associations were with monastic sites, then later churchyards, before escaping into the wild. Snowdrops were not documented in English gardens until the early eighteenth century. The most common snowdrop by far that is naturalised in Britain is Galanthus nivalis, which originates from continental Europe, in a swath from the Pyrenees in the west, through the south of France and Germany, down through central Europe to Italy and Greece in the south, and Ukraine to the East.

Snowdrops have been known to botanists since the days of ancient Greece, but acquired the botanical name Galanthus nivalis in 1753 when described by the famous botanist, Carl Linnaeus. Galanthus is derived from the Greek words gala, meaning ‘milk’, and anthos, meaning ‘flower’. The epithet nivalis is derived from Latin, meaning ‘of the snow’. It all makes perfect sense.

Along with the masses of naturalised snowdrops in our countryside and gardens, there are a great number of named varieties. These are often chance finds, rare naturally occurring variations within otherwise homogenous blankets of flowers. Searching out such prized possessions to cosset and grow, has for some become something of an obsession. These folk are popularly known as ‘galanthophiles’. Here at Deene Park we have a collection numbering a couple of dozen or so named varieties which I add to each year.

It was only in March 2012 that ‘galanthophile’ was included in the Oxford English Dictionary (OED), and is defined there as ‘a collector of or expert on snowdrops’. I say oddly because the term is not a recent innovation, as the OED entry demonstrates by citing its occurrence in an article published in ‘The Garden’ magazine as long ago as July 1892. Britain in the Victorian era was awash with snowdrop enthusiasts, and has remained so since.

Of the varieties grown here at Deene Park, there are a number of which I’m particularly fond:- 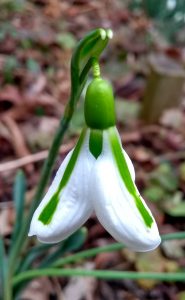 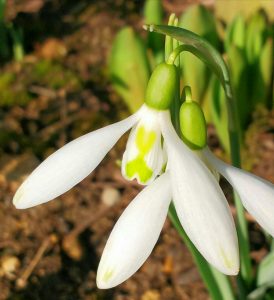 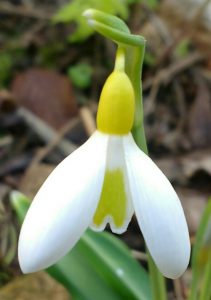 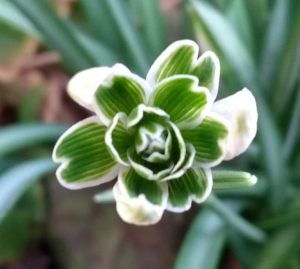 1. ‘Daphne’s Scissors’ has faint green lines on the tips of the outer petals, and inner ones with markings that closely resemble a pair of scissors. Hence the name.

2. G.’Blewbury Tart’ is quite unusual that it holds its flowers upright, leaving nothing to the imagination as it shows off masses of inner petals with deep green markings.

3. ‘South Hayes’ is another very distinctive variety, with swept back outer petals sporting a strong deep green linear marking that runs the length of each petal.

4.  As well as those with the usual green markings, some snowdrops are yellow. G. ‘Wendy’s Gold’ is one of the most popular, and reliable, with a bright yellow ovary and a large yellow markings on the inner petals.

Whether it’s massed carpets of naturalised snowdrops, or the multitude of named varieties with their many different flower forms that attract you most, we cater for all tastes here at Deene Park, and welcome you to come along and enjoy the spectacle on our ‘Snowdrop Sundays’.