First of all, we would like to wish all our readers a Happy New Year, although it’s a little late!

Well, what a November!  it did nothing but rain, the lake was full and coming over the slipway, and even with the sluice gates open we could still not get the water away quickly enough.

But the waterfowl seemed to like it, with plenty of Mallard, Gadwall, Teal, Widgeon and Shelduck in large flocks.  The swans numbered 33 at one stage, the most that I have ever seen on the lake.  The Canada Geese and Greylags are also in large number with large flocks roosting on the fields beside the lake and on the cultivated field.  Also, the weather has been very mild so some of our more frequent winter visitors have not been seen.

Heron and Egrets are still with us and for a few days a Barnard Goose stayed and Kingfishers are still moving around the canal.  As the water is so high the south lawn is a little waterlogged and this gave a good feeding place for Greenshanks and Oyster Catchers, which presumably came from nearby Rutland Water.

Plenty of Fallow Deer and Muntjak have been seen around the edge of the woods and, like the birds, taking full advantage of the mild weather.

With the rain still coming down, the lake stayed at a high level, the weather remained mild with only a few frosts during the month.  Wildfowl remained in high numbers, mainly the Geese, giving us some nice morning and evening flight to and from their feeding areas.  Owls also were in good voice and Barn Owl, Little Owl and Tawney Owls have been seen, some still occupying our boxes.

With a lot of wild berries around on the Holly, Hawthorn and Ivy the birds had a good feast.  A few Fieldfares arrived but again, the weather has been very mild.  Blackbirds, Thrushes, Pheasants and Partridge took advantage of the apples still lying on the floor. 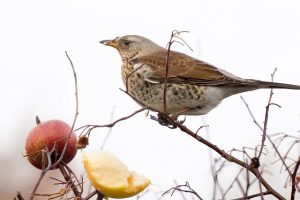 The Fieldfare is a moderate sized bird, reaching a length of ten inches.  It’s back plumage is brown, with the wings and tail shading to a very dark, rich tone.  The breast is light brown with a dapple of black markings.  A winter visitor to the British Isles, when it can be seen in the hedgerows, with other members of the Thrush family.  It likes to eat insects, worms and fruit.

Three to six eggs are laid, blue-green in colour, laid in April to June.  The nest is carefully woven with grasses, fibres, and lined with mud.

Well, another year to enjoy the birds and wildlife in your garden and in the country, so keep you binoculars cleaned and at the ready, as you never know what you might see.