We seem to be going through the months at the rate of knots, and the seasons are once again on the change.  With all the water fowl now in their winter plumage, the geese going through their moult and the goslings now mastering the art of flight. 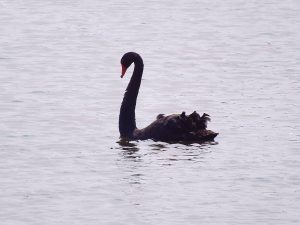 Our black swan Sydney has lost his mate Adelaide, who has not been seen for several months.  However, it seems Sydney has now got a new friend in the form of a Canada Goose.  They have been seen with each other every day either in or with the flock, so he seems to have found a mate.  Also with a strange partner is a Red Kite that is a regular visitor to the park, and seems to have befriended a crow.  Perhaps being together is beneficial to both of them!

Now that the mornings are turning more autumnal, with cold fresh mornings bringing a heavy dew, and the daylight hours getting shorter, the birds are becoming more active in their feeding to build up their winter fat.  There is a plentiful supply of elderberry, blackberries and hips in the hedgerows and we had sightings of Bullfinch, Greenfinch, and Yellow Hammer with their plumage of red, green and yellow giving a splash of colour.

Duck are now forming large rafts of birds in and around the lake, with seagulls (mainly black-headed gulls) in their winter plumage.

Now that the grasslands are getting shorter, the game birds can be seen, with the likes of pheasant, partridge to be found all around the woods.

Muntjacs are barking and looking for their new mate as the season moves to the ‘rut’.

These little visitors travel several thousand miles to get to us each year and spend their summer with us, but all too soon they will be ready to go, and fly back to Africa.

Swallows are a welcomed guest every summer, but unlike the House Martins, next in side buildings like old farm sheds, whereas House Martins like to build on the outside of buildings.  They use the same nest every year and they lay between four to six eggs.  They raise between two to three broods every year, and birds can nest well into September.

They feed mainly on the wing, taking insects in flight.  British Swallow mainly fly to South Eastern Africa, there are about 15 swallow species.   House Martins nest on ledges of buildings and feed the same as swallows, and can be seen feeding young on the wing.  These will also be seen getting ready to leave as they gather on telephone lines.