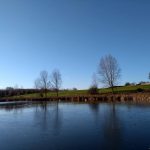 At the end of September and the beginning of October we had a lot of rain, which filled the lake to overflowing.  As procedure instructs, we raised the sluice gates, and over a period of two days allowed the water out of the lake, and at the far end of the lake a small mud flat was created.

This brought in several species of duck and waders to feed on the abundant aquatic life which had been revealed, with fresh water snails, Rams Horn Snails, Fresh Water Shrimp and small fry.   Mallard, Teal, Widgeon, Gadwall, Shelduck, Herons, Egrets and Cormorants were all taking advantage of the food.

Our resident flock of Canada Geese and Greylags stayed close to the bank, along with Sydney and our white farm goose, which has been with us for nearly four years.

But alas Sydney, our black swan, has lost his mate Adelaide.  We were hoping that she was sitting on a nest and that she would appear, but we have not seen her.

The swallows have now gone back to Africa with just a few pairs staying around, bringing off late broods.  Buzzards and Kites have been abundant all year long, with the Osprey who brought off three chicks.  Early this month for a few days we had a Peregrine Falcon around the House.

Out and away from the lake, Jays have been busy storing nuts, along with the squirrels in the garden.  These are fun to watch as they come across the lawns with a nut in their mouth, counting how many steps they have taken from their ‘dray’ or nearest tree, so they can find it later.

Game birds also are abundant, with the cock pheasant being the brightest, match the autumn leaves in the colour of his plumage.  Partridge are in their little caveys and tend to stay as a group.

October also brings the deer ‘rut’.  With the Fallow Deer calling in his hinds and then keeping rival bucks away to keep his hareem.  Muntjac also have been barking, quite an unusual sound to hear.

The leaves are just turning, and again, we can see the smaller birds looking for food in the branches.  Now is the time to get the bird feeders topped up and get the birds into your garden.

Medieval Latin – Falco Peregrinus, which means Pilgrim Falcon, so named because young Peregrines were caught in passage (pilgrimage) from their breeding place rather than from their nest.

A bird which was widely distributed, but persecuted during the wars as it was killing the homing pigeons en route with vital plans, commands and instructions during battles.

With it’s grey and white plumage, this Falcoln is very distinctive.  It likes high places such as open cliff faces or tall buildings.  Cathedrals or very high buildings – we have a local pair which live on top of a flour mill.

Their diet is of small birds, mainly Pigeon and Partridge.   They lay between two to three eggs, and feed the chicks on plucked morsels until they get bigger.

Enjoy your birding, fill those feeders and watch the birds in comfort, but it is better to brave the weather in a hide with a flask of soup.