We seem to be going through these months at the rate of knots, but nature is still thriving and we seem to be seeing more wildlife because of the shutdown and Covid 19.

On and around the lake the goslings are getting ready to fly with their parents, so there are large rafts on the lake with adult and young, but at present the adults are also grounded because they are in their moult, so they just walk and feed around the lake.

There are some late ducklings appearing on the lake with Mallard, Gadwall and Tufted Duck having young.  Coots and Moorhen also with little broods.  The swans have also done well, with cygnets on the top lake and the large lake.  The good news is that both pairs of our Crested Grebes have had young, they are still small enough to ride around on the backs of their parents.

Our birds of prey – Red Kites and Buzzards have not been seen in large numbers as we normally see because they are also sitting on nests.  The Osprey has been seen fishing on the large lake, which is always nice to see when they are hunting and diving into the water.

The fish have now finished spawning, they are now more interested in feeding and can be seen on the top of the water basking.

Further inland and around the Parkland, deer have been coming out of the woods to graze on the fresh grass shoots now that the farmers have harvested the hay and after having rain over the past week this has given a tasty treat.

One morning a Fallow Deer was seen in front of the House sitting among our two bronze sculptures of Red Deer! 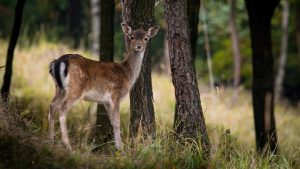 Hares have given birth to young in the House Orchard and the area has been avoided to give the young some peace and quiet, they seem to be benefiting from it and can still be seen in the garden.  In the House the Jackdaws have been busy getting their young out of their nest, and a wren has built a nest in the roof space and had four chicks. 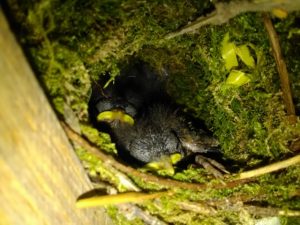 Nature seems to be thriving during this pandemic.