Well, at last we have had a few days of rain in June, nice and steady for three days which helps the grasslands and the water level in the lake.

The swans are still doing well bringing up their young, of which we now have seven cygnets.  There were a few late broods of ducklings on the middle lake, and the Crested Grebes now have two chicks each.  These can be seen on the big lake, with the young riding on their parent’s back to keep them safe. 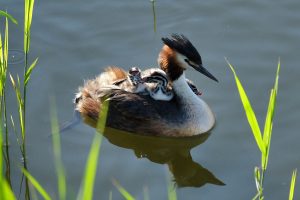 The Greylags and Canada Geese have now got fully grown families, but most of the adults are flightless due to the moulting season, which leaves the lakeside full of feathers, which we clear up to make the car park clear for visitors.

We had no special birds with us last month, but we still have a great amount to watch on and off the water.  During the rain, when the weather was a little colder, Swallow, House Martins and Sand Martins gathered to catch the insect live – their speed and agility allowing them to just skim the water to catch them.  Dragonflies have also been in large numbers around the canal, and water’s edge.

Also our pair of Kingfishers have been going up and down with food for their young.  They are one of the highlights of the garden, a pleasure to see a flash of blue and a whistle.

The farmers have been cutting the grass for hay and so there are a few casualties, which are picked up by the Red Kites and Buzzards – it’s good to see them circulating in such large numbers. 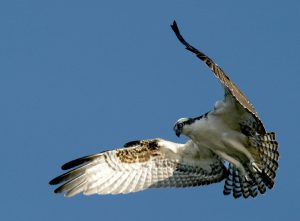 At this time of year we have our special bird, the Osprey.  Osprey has now making a comeback into Great Britain, and it’s nice to have one over Deene Lake.

Several birds of prey have turned to fish for food, but by far the most successful and efficient is the Osprey.  It is classified as in a family of its own.  Their nests are found in pine and spruce, usually in dead branches high up the trunk of the tree, and are used year after year.

They lay three eggs which hatch after 35 days, the incubation is mainly done by the female, the male shares up to 30% during daylight.  The male provides for the family bringing back three to four fish a day.  They have a distinctive flight with a constant squeak and their head down searching for fish.

Well, another month and the year in halfway from winter, but even more to watch and look forward to, so good birding.