With July being a little wetter, the lake managed to get water over the dam spillway showing a good height of water at 740cm.  The bird life took advantage of this and with very little weed on the surface it made mobility good. 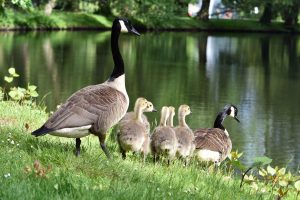 The Greylags and Canada geese have been through their moult and are flying again.  With the goslings now getting the freedom of flight they are keeping up with their parents – they are a sight to see in the morning, very early, when you catch a morning flight and late evening when they return back to the lake after coming back from feeding on the rape and wheat fields.

They arrive at the lake at a height, and then with a flick of their wing they lose height very quickly and descend to the lake surface.  This is called ‘Wiffling’ and often seen in Geese and Waterfowl, although it can be seen with crows.

Sydney, our male black swan, is on his own at the moment with the whereabouts of his partner unknown.

Moorhens and Coots have late broods of chicks on the back water, with our Little Egret and Herons feeding on the abundant amount of toadlets and froglets. 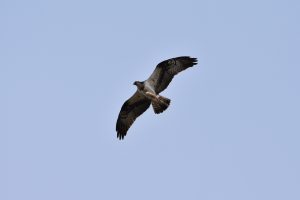 Osprey have been on the lake most days, and have now brought their offspring with them to the lake to show them how to fish.  Soon they will be leaving us to go back to Africa.

All our bird boxes are empty now, with the boxes being used as roost sites.  The Jackdaw in the Owl boxes tend to make them their permanent home.  Swallows, Swifts, and Sandmartins are still in good numbers.

Away from the lake and inland, Pheasant and Partridge have young and the dry weather has helped them bring off their chicks.

The Nightingale’s song has been so praised in literature, the thing that sets it apart from other birds is it’s strong, rich and powerful song – and they sing at night.  Nightingales arrive in late spring and make territories in thickets on the edge of woods.  Their preferred habitat is shady, dense bushes of nettles.  They lay four to five eggs, which are deep olive-brown and are incubated by the female.  It’s a treat to hear a Nightingale, as their habitat is being destroyed.  Luckily we still have their habitat around the Estate and on a still summer evening we might just hear their song.

Keep watching, it will soon be early autumn with more changes to see and more birds to watch.