Bird Blog | April, May and June

Bird Blog | April, May and June

Well, what a month!  everything has been put on hold as the coronavirus takes hold of our country.  No social gatherings, meetings or anything which involves groups of people.  As I write this we are still just about on lockdown, but nature and the wildlife carries on without knowing what is going on around them, or do they?  They say that nature always looks after itself, so maybe this is the case.

Deene Park Estate has been on lockdown since March, but there are things to do, and these things we do on our own with no contact with the public or staff.  With very little rainfall the lake returned back to it’s normal level, the canal at the top end of the garden has been lowered to drain the south lawn, which has many springs in it, thus making it flood, so we are trying to drain it and get the water away.  Being so wet and lush, this has made a lovely habitat for our wildfowl on the lake – Moorhen, Coot, Mallard, Gadwall, Widgeon, and Teal have taken to it like ‘ducks to water’!  With a good food source the lawn makes a good place to watch the birds going about their business feeding, resting, and at this time of year, mating.

Most of the birds have paired up.  The geese – Canada and Greylags have made nests on the islands and are sitting.  The white domestic goose also has a mate, and this will be the sixth year he has been with us at Deene.

On the big lake two pairs of Great Crested Grebes have been giving us some fantastic displays, something that is always worth looking forward to in the spring as everything wakes up. 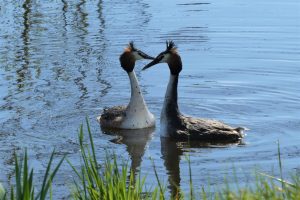 The geese are in large numbers, followed by the swans.  On one day we had 32 white swans and our black swan ‘Sydney’, who is at a loss without a mate – Adelaide disappeared last year.  Mr Brudenell feeds Sydney every day, he always come first to be given his wheat, and he is getting to know the car.

Ducks are plentiful, we have already found some nests and so look forward to some ducklings around Easter next year.

With the lambs in the field and the sheep getting extra feed, our four Egyptian Geese hang around the feed racks to grab an easy meal.  One pair have taken up their normal nesting site in the grounds.

Most of the wildlife on the Estate at the moment have one thing on their mind.  Hares are boxing and trying to win a mate.  Pheasants are postulating to gain the attention of the hens and Robins, Wrens, Blackbirds and more are singing from early morning to dusk to get their mate.  The Blackbird in the inner courtyard managed to bring up three chicks, even in the rainy months.

May 1st – Mallard have eight ducklings

May 8th – Shelduck have six ducklings

During June the wildlife seem to have benefited from the lack of visitors around the gardens and lake.  Swans had their cygnets, four on the lake and two pairs still on the nest.  The birdsong seems to be more noisy than usual, with the Nightingale singing most evenings. 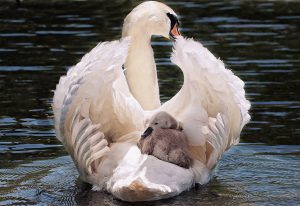 Now the weather has improved with drier days and we can look forward to getting out to see nature at it’s very best.